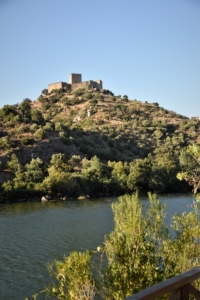 140 steps! These are the ones you have to climb to get to Belver Castle. A fortified castle like those in children’s tales, perched on its rock, with crenellated walls and dungeon. And even if this former fortress has long since lost its role of defence along the Tagus, it has retained the mysterious charm of the Middle Ages, although, as we know, this was not a tender period.

In medieval times, the Almóada Califat, which occupied part of the territory that is now Portuguese, relegated Christian forces to the Tagus Line.  Further on at the time of the Christian reconquest, King Don Sancho I donated the territory between the Zezere and Tagus rivers to the Order of the Hospitalers.

A territory then called Guidintesta or Guidi in testa.

The prior of the knight monks then had the castle built not to enjoy the magnificent view of the Tagus, but to defend the territory. It is said that the royal treasure was kept in Belver’s compound.

The castle is relatively small in size, but perched on its promontory it impresses.
In the inner courtyard is a small chapel dedicated to St Brás.

Built at the end of the 15th century and the beginning of the 16th century, the modest chapel has a treasure: its altarpiece is composed of statues pierced with holes that were used to collect the relics that the soldier monks brought back from the crusades.

In the middle of these relics, which have now disappeared, is the statue of Saint Brás. It is a miracle that the reliquary is still in its original place. Only one figurine is missing. A must see in Belver, as well as the view of the Tagus Valley.

The keep – Torre de Menagem in Portuguese – has recently been restored and allows you to see an exhibition dedicated to the history of the castle.

The castle cannot be visited on Mondays or Tuesdays. The other days, it is closed from 1pm to 2pm. Admission: 2 €

Not to be missed: the fountain walk. A path bypasses the village and leads to the old fountain. The access road is punctuated by recent sculptures evocative of the place or history of the village and the people who live there.

The village has two museums, created by the Town Hall of Gavião, which seeks to enhance its local heritage. 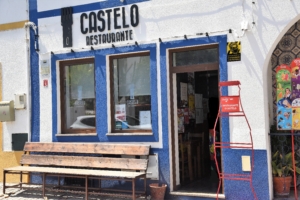 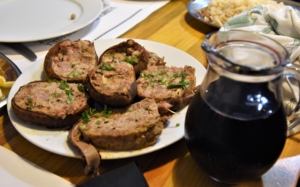 O Castelo – the castle – is a small restaurant that belonged to the grandparents of the current owners. You can enjoy a household cuisine that gives pride of place to local recipes. And every day a traditional dish is served. Lisbon-affinités had the chance to taste the fried bucho. The stuffed bucho is a dish that comes directly from the medieval period. It is a pork belly stuffed with different pieces of meat, herbs and spices.

O Castelo also offers typical fish dishes from the river: eels, fried sável (shad), or açorda (crumbled and moist bread) made with fish eggs, and others.

Lisbon-affiliates’ favourite in the region

Where to sleep
to discover our suggestion read the article Alamal, Belver beach