South bank of the Tejo. To discover with Maguy Nunes.

Maguy Nunes has lived in Lisbon for three decades. Trained as a laboratory assistant Maguy has made a career change that suits her like a glove. She created LoveLisbon, for visits by tuk-tuk or car from Cacilhas. Since the pier, Maguy takes care of everything with mastery. 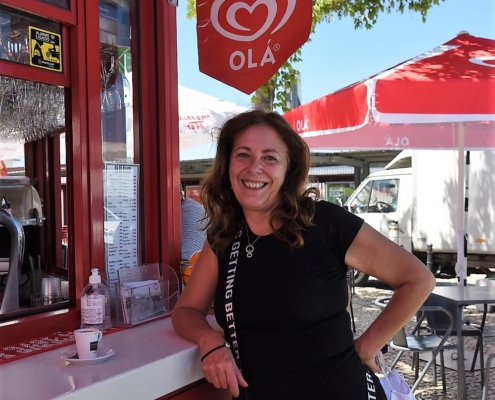 Cacilhas, the other home port…

Taking the ferry from Cais do Sodré to Cacilhas is a great gift to treat oneself. After all, a few euros to see Lisbon in a different way, the majestic 25 de Abril Bridge and the Christ the King, it’s worth the detour.

After all Cacilhas is neither far nor near. And that is one of the advantages of visiting this former cargo port serving Lisbon. Cacilhas has finally kept many of the features of the old port of Almada: a quay alongside ruined warehouses, filibuster’s paths to climb up to the old town of Almada and the Casa da Cerca.

The Casa da Cerca is an old Solar (summer palace) from the late 17th or early 18th century. Today it is a centre for contemporary art. Its gardens and its superb view over Lisbon make the Casa da Cerca a must for a guided tour on the south bank.

Cacilhas a pier in perpetual motion

Ferries connect Lisbon and Cacilhas from morning to evening, with a short night-time interruption. At the pier a break at the kiosk “Dá Cá Cilhas” is essential. The time to be told the story of a lighthouse that wanted to travel around.

The old village of fishermen and merchants still preserves some elegant and beautifully restored houses. The restaurants whose terraces overflow onto the street offer the local pride: fish, fish and more fish.

However, this is not the only specialty. We can’t forget seefood.

The bookshop-café “A meia volta de Úrano” in the main street of Cacilhas, is one of Maguy’s favourite places.

The Christ the King

He dominates Lisbon. Built from 1949 the Christ The King is the counterpart of the Christ of Corcovado in Brazil, to which it is turned.

With its pedestal, the statue is 113 metres high. And the monument is built on a hill 133 meters above the Tejo.

That’s why the view on the mouth of the Tejo is magnificent. The river flows into the Atlantic Ocean at the Bugio Lighthouse, which can be seen to the west. And to the east, the view of Lisbon, the Vasco de Gama Bridge and the city of Seixal is breathtaking.

On the south side, you can admire the Serra da Arrabida. Finally, a breathtaking view of the 25 Abril bridge.

An elevator provides access to the foot of the statue. 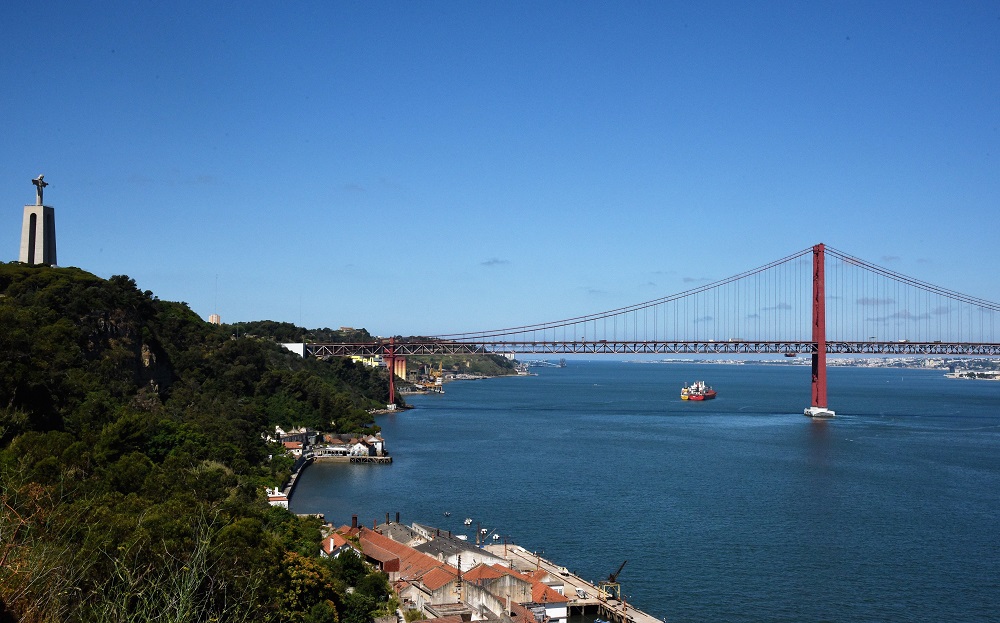 Traditional Xávega fishing is done on the beach. In the past, men would go out by boat to throw the encircling net into the sea, which was then pulled over the sand by oxen.

The technique almost hasn’t changed. However, today it’s tractors that haul the fish onto the beach. But the nets have to be well stretched to ensure a good catch. But most of the work is still done by dint of hard work.

As tradition dictates, immediately on the sand, the fish is sorted and sold to waiting customers. The regular restaurateurs reserve the best part for themselves: it’s impossible to find a fresher fish.

That’s why the onlookers will have to settle for what’s left. But there’s always a good munge to take home.

However, if there is something left over, the master fisherman will be able to sell his catch by open outcry in the harbour.

Xávega small-scale fishing is authorised on several beaches on the Atlantic coast, particularly the central one. Very old, it is nevertheless regulated since 2000.

The word xávega comes from the Arabic xábaca. This style of fishing is practiced in Spain, Malaga but also in Morocco and Mauritania.

Visits are organized both in Lisbon and Cacilhas.

The lathes are flexible, on demand.

For Cacilhas count half a day. Prices à la carte and according to the number of people (the crossing of the Tejo is not included).