Coches, a museum for travelling 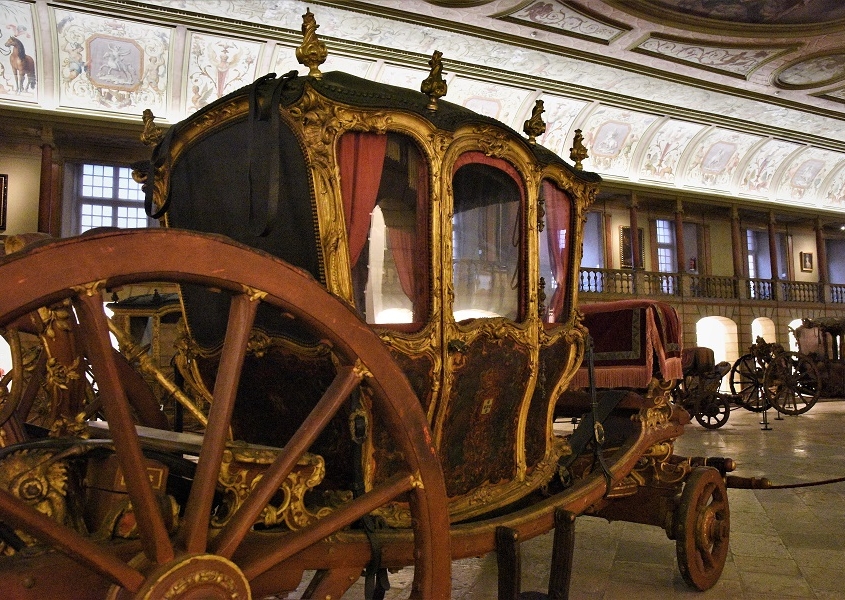 The Museum of Coches has one of the most beautiful collections of carriages in the world.

Installed in a modern building in Belém since 2015, the work of the Brazilian architect Paulo Mendes da Rocha and the Portuguese architect Ricardo Bak Gordon is located near the Presidential Palace in Belém.

Two huge naves and a gallery contain a superb collection of coaches and carriages, sedans and landaus, bench carriages and porter chairs. A total of 78 coaches are on display.

They come from the former museum in the Picadeiro of the Palais de Belém – the Picadeiro or Haras – right next door where the imposing coaches were cramped.

The new modern building is remarkable for its size and the height of its ceilings.

Visitors can walk around the carriages while on the walls in showcases are displayed the clothes of the lackeys, the whips of the coachmen and the adornments of the horses.

Videos on the walls explain the context of the periods and give life in the place.

Even the imposing dimensions and minimalist signalisation, the magic works: the gold of the carriages, the allegorical statues of the monarchical powers, the colourful fabrics…everything contributes to enhance a splendour that no longer exists.

The Museum of coches was created in 1905 by Queen Dona Amélia of Orleans and Bragança.

This museum of coches was destined to preserve the rich heritage.

An initiative that still allows us to admire the old means of transport today.

The museum has some of the oldest specimens in the world and dating from the 16th century. The word ” coche ” comes from the name of the Bulgarian town Kocs where the first specimens were created before reaching Italy and then all the European courts. The oldest car owned by the museum is from 1619 and belonged to Filipe II from Portugal (Filipe III from Spain who came to visit Portugal).

Magnificent specimens not to be missed: exuberant Ocean Coche of the Seas, under its baroque gilding; a delicious French sedan and Prince D. Carlos baby carriage. Carlos, the future King D. Carlos I and even a mail coach that seems to have come straight out of a Count of Grimm.

The size of the museum enhances the value of the innumerable cars on display.

The upper gallery displays maquettes and is also used for temporary exhibitions.

The museum of the coches allows to admire the Empire Square and the Presidential Palace of Belém.

Nearby is the old museum, or Picadeiro Real, which dates from the second half of the eighteenth century. It was originally the salon of the Royal Stud Farm of the Palace of Belém and was used by the court between two equestrian demonstrations.

In a magnificent building the majestic coaches appear in their place.

The building still preserves some beautiful examples of carriages. It was Princess Amélie d’Orléans who had the idea of transforming the building into the Museum of the Coaches. But from its origin, the museum was too small: in 1910 the establishment of the Republic and the extinction of the Royal House drove many vehicles into the Picadeiro’s building.

This building can still be visited.

A single ticket of 10 € allows you to visit the 2 museums.