St Vincent out of the walls.    Majestic mausoleum 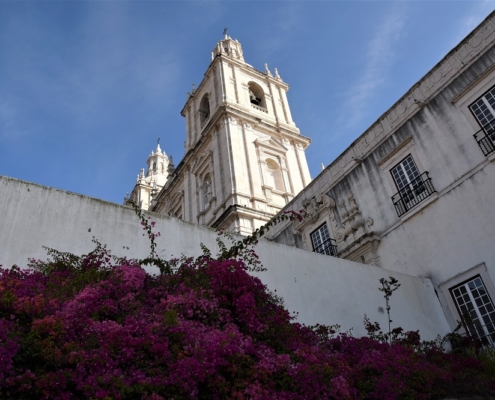 St Vicente out of the walls (São Vicente de fora) owes its name to its geographical position outside the Lisbon area in medieval times.

St Vincent one of the most important monuments in Lisbon was erected by the will of D. Afonso Henriques from 1147 onwards: the founding king had made the promise to build a church and a convent if he won the battle of reconquest against the Arabs then masters of much of Portugal.

Helped by the crusaders who came to reinforce him from several European countries, the king was victorious and kept his promise.

Today, the monument we are visiting no longer has much to do with the original building.  Already the name Hors-les-murs is no longer appropriate. And above all the monastery was completely rebuilt, first in 1527 by the will of King D. João III. Then, at the beginning of the reign of Philip I, who gave St Vincent his present appearance: that of a Pantheon, a royal and religious mausoleum.

The former monastery offers thematic guided tours. And the one we are following here is called « Burials in São Vicente ». It allows access to rooms that are prohibited to the general public. 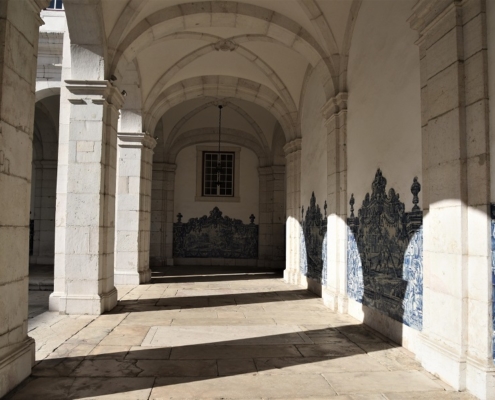 Just arrived in one of the cloisters where the blue of the azulejos contrasts with the white of the stone, the first surprise comes from an engraving shown by the guide: we see the primitive monastery, very different from the current one of course. But on this rare drawing is a cemetery: the one of D. Henriques’ crusaders! It is not very clear, however, that new references to this issue will be found during the visit.

If the Romans buried their dead far from the city, Christians gradually associated the two worlds. To the point of burying the dead in churches in order to place them under divine protection.

Myths and legends, rituals and quirks mark the route of the visit.

The first surprise is inside the sacristy, richly decorated with marble inlay. It contains an unexpected grave that only visitors to « Burials in São Vicente » can discover. The fragile floor of the sacristy does not allow too much trampling. Yet it is well under our feet that this mystery is hidden.

We couldn’t say any more or we’d reveal the mystery.

Not to be missed is the reliquary arch, which tells the story of the martyrs of Morocco. The tragic end of seven children aged 12 to 17 who were part of the retinue of the young king D. Sebastião, at the famous battle of Alcacer Quibir. A beautiful book that helps to understand the importance of relics (usually bodily) for churches.

St Vincent is a tomb, a pantheon.

The tombs of the kings and queens of the Braganza dynasty, preserved until now in a small room, have been repatriated here. The rich mausoleums that adorn the room dedicated to the royal dynasty impress.

You can admire the tomb of Amélie d’Orléans where her portrait in low marble relief surmounted by a starry crown strangely evokes Princess Diana of England.

A weeping woman in the purest romantic art of cemeteries is leaning over the tomb of King Dom Carlos and his son. The sumptuous marbles, the decorative crowns, the mysteries around the royal family… so many elements revealed.

In a chapel of one of the cloisters, there is a morbid statuary and its symbols: skull, sickle, and cypress branches to symbolize immortality. This chapel receives the two funeral monuments dedicated to the Children of Palhava (Meninos de Palhavã), the bastard sons of King D João V who recognized them. They had therefore been able to benefit from a royal burial.

In addition to its macabre decoration, the chapel contains in its floor the viscera of the Portuguese kings.

The tradition of preserving the mortal remains of the greats of this world apart has continued for a very long time. Embalmed, the noble viscera have sometimes preserved very well. Thus it was discovered that the king died under the influence of a poison, arsenic.

The floor tiles retain the indication of what they contain. And contribute to the curious atmosphere in this curious chapel.

Although the Patriarchs’ Hall is not of great architectural interest, it impresses by the presence of the many sarcophagi of the patriarchs of the Portuguese church. The patriarchy gives the rank of second character of the Catholic Church behind the Pope. There are 5 of them, including the one in Lisbon.

The real highlight of the visit is behind a door, near the entrance to the Pantheon.

It only opens for this visit. It’s the ossuary. Among other things, we found the bones of the famous knights of Dom Henriques, probably transferred from the cemetery, which were seen on the engraving representing the primitive monastery.  However, the researchers have not provided proof of this. It is also believed that the bones of the victims of the terrible earthquake of November 1, 1755, were piled up in this ossuary (Carneiro de São Vicente).

And under the pile of bones, archaeologists have made other discoveries. A flashlight makes it possible to see them and to make a small shiver run on the spine of the visitors.

Following the corridors of the imposing monastery and passing under the austere arches of its cloisters, this visit « Burials in São Vicente » reveals the many legends and myths that mark the history of Portugal: that of the cursed dynasty, or that of these mysterious knights of the reconquest. We also learn why gold coins are found in tombs: the tradition goes back to ancient Egypt where silver was placed on the eyes and forehead of the mummified deceased so that he could pay for his passage to the afterlife…

Christians have developed the cult of the lantern. It is said that this tradition originates in the Celtic festival of « Sanhaim »: November 1 translates the beginning of hibernation. The passage between life and death is the narrowest: houses and tombs are illuminated so that the dead can come and visit the living.

We cover the mirrors, we  make  fire and light up  the candles so they won’t be afraid of their  own reflection!

At the end of the « Burials in St Vincent » tour, visitors can freely access the other rooms of the monastery and climb onto the terrace, which offers a magnificent 360-degree view of Lisbon.

The monastery of St Vincent has many other treasures and thematic visits are organized regularly, one Saturday per month, at 11 am. These visits cover different themes: architecture, art, azulejos…

A supplement of two euros is added to the entrance fee of 5 euros. Only on reservation: 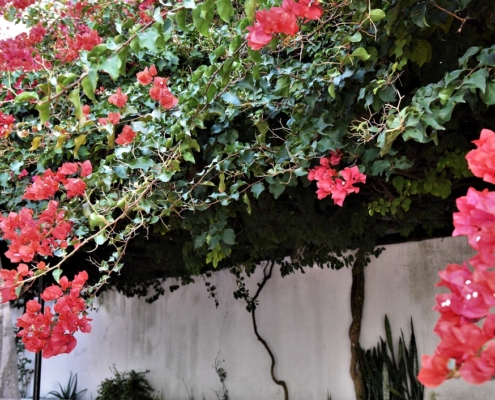