Tram 24 or electrico 24: a line to be rediscovered between Place Camoens and Campolide. 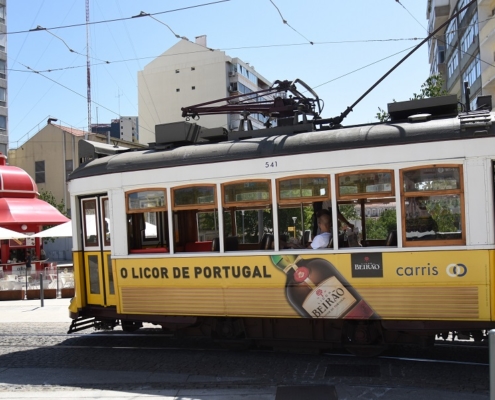 The tram is an emblem of Lisbon.

The mythical 28 of course that straddles the hills of the city centre. And on the 15th, which serves Belém and its historical monuments in a modern version.

Tram 24 is an electrico, as we say in Portuguese, a local one, to serve the inhabitants of the city centre of Camoens Square (Baixa Chiado) in Campolide.

It was the residents who demanded that this line, which had been shut down for 23 years, be put back into service.

The terminus is in Campolide, rua de Campolide, not far from the Amoreiras, where you can go shopping and climb to the “360 degree” viewpoint of the shopping centre (see) Recently renovated, the square has become very pleasant, with on one side the “kiosk 24” in strong red, and on the other side the green wall of the restaurant “A Valenciana

“A Valenciana” is a restaurant with a terrace.

You can of course taste the grilled chickens of this famous “churrasqueira”. A very popular takeaway dish. The terrace under large parasols is next to the green wall which brings freshness. The service is kind. The dishes a little expensive. The chicken to go is at a different price.

A Valenciana is ideal for group meals.

After these gourmet and comforting stops, all you have to do is take tram 24 in the other direction, towards Luis de Camões Square.

Follow the advice of www.lisbonne-affinités.com, buy the viva card or the Lisboacard card to use the tram. The round trip within 24 with purchase of the ticket from the driver amounts to 6 €. 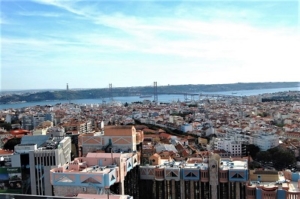