Vila Viçosa, wonder of the Bragança in Alentejo 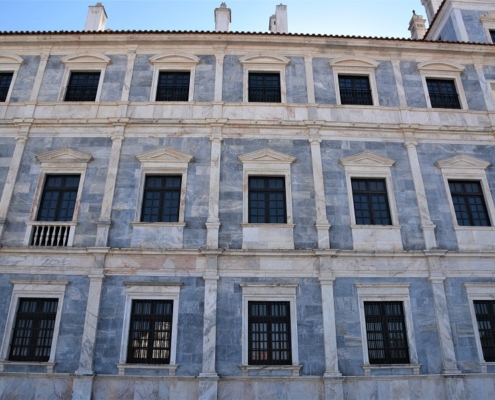 Viçosa is a curious name for a city in Alentejo

It means green, endowed with the ability to regenerate easily. We therefore want it to be vigorous, strong and rooted.

The city was the domain of the Dukes of Bragança, a lineage that was ennobled almost at the birth of the kingdom and until the establishment of the Republic in 1910. The monarchs were then Kings of Portugal and Dukes of Bragança.

In Vila Viçosa the duchy was above all a fortified place. It was not until Dom Jaime and the year 1501 that the magnificent and imposing ducal palace was born in the centre of the city.

Jaime Duc de Bragança is one of those characters who stand out in the complicated history of the kingdoms and their inferiors. First because he was exiled to Spain at the age of 4, his family being accused of treason.

Then because he died of jealousy he had his young wife, Leonor de Gusmão, beheaded. He thought he was unfaithful. Even if she denied it, the Duke was merciless. However, the suspicions were not justified…

It was Dom Jaime who began the construction of the ducal palace.

But it was the 5th Duke, D. Teodósio I, who made the most important changes to the Bragança palace. Indeed, for the wedding of her sister, Queen Isabel, with the infanta D. Duarte brother of King D. João I, it was necessary to be grandiose.

The 100-metre long facade is an idea of this Duke.

It is made of blue marble from the region, and shines in the sun. The noble material breaks the apparent hardness of the impressive Mannerist facade on the main square of the city.

Inside the palace there is a series of 50 rooms, which is impressive. The building quickly became a second home, a hunting lodge. But the dukes and duchesses, the rosi and queens have made many changes and comforts over time.

It is in this royal holiday residence, much appreciated by the last rulers of Portugal, King Dom Carlos and Queen Amélia, of French origin. The king spent his last night in the ducal palace before being murdered on February 1, 1908.

The visit of the palace:

Guided tours are strongly recommended. Visiting 50 rooms alone would be tedious. These rooms are richly decorated. Paintings and statues, draperies and tapestries, furniture and crockery……. everything tells the story of Portugal.  Not to be missed is the jellyfish room, the dukes’ room, with portraits of all the Bragança.

The magnificent carved marble fireplaces provided a little comfort and comfort in winter.

The last reign is well represented, due to King Dom Carlos’ attachment to the ducal residence. He was passionate about art and himself a painter. Some of his paintings and watercolours adorn the walls of the royal residence.

Two spaces not to be missed. The kitchen and its dozens and dozens of copper stoves and cauldrons as well as the old stables where part of the collections of the Musée des Coches are located. We can see the pram in which the royal family had taken its place during the murder of Dom Carlos and his son.

On the square of beautiful proportions, we can admire the equestrian statue of D. João IV, king of Portugal.

No visits on Tuesday mornings and they are suspended from 1pm to 2pm.

Today, it is the foundation of Bragança that manages the palace and the works of art.